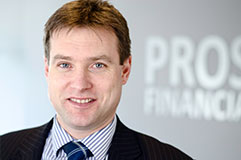 Owen has been working in financial services for over 15 years. He graduated from Stirling University with an honours degree in Accountancy and Finance, holds the prestigious Chartered Insurance Institute Chartered Financial Planner title and recently became a fellow of the Personal Finance Society.

In his spare time Owen enjoys racket sports and in his younger days played tennis and squash to a high level being a former tennis scholar at Stirling University and Scottish Internationalist. These days Owen can still be found on various sports courts failing to recreate past glories as a combination of father time and family time have taken their natural toll.

He specialises in pensions and investments and holds specialist pension transfer permissions allowing him to advise on all areas of pension planning including final salary transfers. Owen has been with Prosperity since 2016 and has also worked with Prudential, LV= and Zurich primarily as a pensions specialist. He has been continually improving his knowledge in the pensions and investments area and strives to improve his skill set with frequent exam sittings to test his skills.